Over the past decade, Intel microprocessors have been the easiest prey for attackers. They are highly vulnerable to Meltdown and Specter CPU Vulnerabilities. The critical vulnerability allows an attacker to access a process’s private data such as passwords, keystrokes, and other things even outside the virtual device. The entire industry is currently struggling to find the perfect solution to fix the Meltdown and Specter CPU vulnerabilities in Windows 10. However, Microsoft is working to alleviate this problem by releasing an update. security update. But here we will show some more workaround methods to bypass this problem.

Step 1: Go to the Cortana box near the Start menu from your computer and start typing PowerShell .

Step 2: In the search results, PowerShell will appear at the top. Put a right click on it and choose ‘ Run as Administrator ‘.

Step 3: Type or copy / paste the following command in the blue table

Step 4 : Once you press Enter , the operating system will install an additional module on the computer.

Step-5: Answer by inserting Y twice when it prompts.

Step 6: Now you need to enable the installed modules. To do this, type the following command and press the Enter button: The output should be displayed allowing protection to be correct. Unfortunately, if you get the following error message:

You need to modify ‘PowerShell Execution Policy’ so that it won’t be restricted or ignored. To do so, follow the given instructions.

Step 1: Press the Windows + R shortcut with the view to bring up the Run dialog box.

Step-2: In its text field, type regedit and press the Enter key. Click Yes on the UAC prompt. Next, Registry Editor will open in the first place.

Step 3: Now, when you change the execution policy for an existing user, navigate to the path below:

Step 4: On the right pane, double-click on the string value ExecutionPolicy . In the Edit String dialog box, set the Value Data to Unrestricted 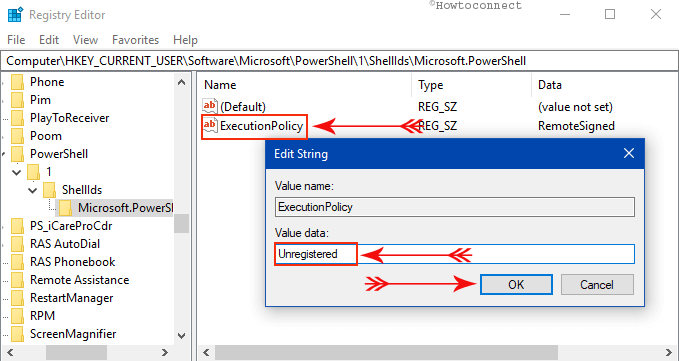 Step-5 : In the case of policy changes made to the Local Machine scope, go to the following path.

Step-6: Here also double click on the ExecutionPolicy string value. Set the value data to Unrestricted in the pop-up. Edit the string like above.

Windows 10 users should be glad to hear that, their computers will automatically download security updates. However, it also depends on your computer’s Settings. To ensure the protection of your computer, follow the steps below:

Step 1: Go to the Start menu from your computer and click Settings . Instead, typing Windows – I also starts the application.

Step 2: When you open the default Settings program, you will see different tabs, choose Update & Security .

Step 3: A new page will open immediately. If the security fix hasn’t been installed, then there’s a chance it’s waiting in an Update queue. If you don’t see anything, tap the ‘ View installed update history ‘ link on the right side to check if the system has installed it. Researchers can eventually find out that this also affects ARM64 and AMD CPUs. However, patching the operating system just won’t do anything here in this regard. The fix should involve updating the Operating System Kernel, updating the CPU’s processor code, as well as updating UEFI / BIOS / firmware for some machines. After going through the resolutions, we will have a glimpse of the two culprits for a while.

Meltdown and Specter CPU vulnerabilities are two of the most feared processor security flaws affecting the industry lately. Customers are looking for an immediate solution to fix this problem. Microprocessors built almost 20 years ago are the easiest prey. These two vulnerabilities help intruders penetrate special processor memory by exploiting parallel processes. Additionally, these allow them to use JavaScript code running in a web browser to access memory. In this method, people can access personal data that contains information, passwords and all valuable information.

So you can Fix Meltdown and Specter CPU vulnerabilities in Windows 10 if your PC is affected.

The Meltdown and Specter CPU vulnerabilities are critical to the computer’s security system. Users are in danger for these two because attackers can reach them at any time. However, everyone in the tech industry is doing their best to eliminate these culprits. We discussed the Windows 10 security precaution as well as how to fix the Meltdown and Specter CPU vulnerabilities in Windows 10 if you are affected. Follow the instructions closely so you can avoid these vulnerabilities. During the proceedings you may have a security system on your computer