Many gamers consider the raccoon Police Department to be the most interesting area in Resident Evil 2, far beyond the sewers or the lab.

Located on the Dojima River banks in Osaka, only a few kilometers from Capcom’s “headquarters” is a red brick building with a unique dome. It is the central hall of Osaka City (Central Public Hall), one of the oldest houses in the city, and also the inspiration for Capcom to create Raccoon City police headquarters in Resident Evil 2. Meanwhile, the Resident Evil 2 police headquarters is one of the most beautiful and interesting locations in the game (if you ignore wandering zombies). When it is remade in the remake 2019, it has been upgraded with a more beautiful new graphics background. Do you want to know how this area was designed for Capcom? If the answer is yes, let’s explore that in this article. Built-in 1918 as a center of the city’s cultural activities, Osaka City hall has towering pillars, elaborate carvings, and a curved dome-like those of churches – just like what Leon and Claire saw when they first entered the hall of the Raccoon City Police Department in the original version. The difference is probably only in the building’s appearance, the roar of zombies and gore on the floor or the walls. Whether in 2D like Resident Evil 2 or 3D as in the remake, the police department always creates a creepy and mysterious feeling from the beginning, letting the protagonists know that it is not a haven. They are looking for.

When developing the Resident Evil 2 remake, Capcom decided to rebuild a new police headquarters with modern technology but still retain its scary atmosphere. “Our goal is to retain the feel of the original building, but increase the level of realism and size,” remake project manager Kazunori Kadoi said. “I’m confident that gamers will respond positively, and I don’t feel any pressure on being worthy of the original version.”

If Resident Evil 2 were developed by a Western studio, we probably wouldn’t have the police department like it is today. It will probably be a square building, filled with boring boxes that you can see everywhere in TV dramas, not the Gothic architecture that we have seen. Come to think of it, have you ever seen the image of a police station decorated with a giant marble statue right behind the reception desk? This statue is an important element that Capcom wants to reproduce in the Remake version, next to the stuffed animals in the office of the fat boss Brian Irons. By exaggerating the goddess statue’s size, adding dramatic rays illuminating it from above in a dramatic manner, gamers who have not experienced the original version will immediately pay attention to the statue and know. It has an important role in the game, and those who have experienced Resident Evil 2 will be greeted with a familiar scene that they like. 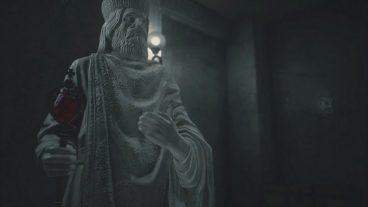 “When I played Resident Evil 2 for the first time as a teenager, I never wondered why the Raccoon City police chose a complex old building, full of intricate puzzles as headquarters,” Kadoi said. But now people have more questions, so Capcom decided to create a scene for the police department. You can find clues to introduce the building somewhere in the game, such as a piece of paper in the waiting room that will tell you that it was an art museum before being converted into a police station. Old paintings, bronze statues, and antiques scattered throughout the area – usually in warehouses – will help “consolidate” this information, giving gamers an impression of the building’s past. The exhibits are now rolling everywhere.

Another important element that is less noticeable is the game’s’ 90s setting. You may only notice this when using the save feature with a typewriter, but it still exists in Leon’s hairstyle, CRT’s bulky computer screens on desks, and some other objects. The product is scattered in an environment that gamers must be observant to realize.

Other factors, such as the puzzle system or the secret tunnels hidden in the Raccoon police station, are still problems gamers might wonder about. Even, it suddenly became more relevant with just a little information. ” This place is a museum. ” They still have something out of place in this house, but at least that’s something gamers easily overlooked, and Capcom agrees to keep it for gameplay.

The biggest difference between the two police stations in the two-game versions is their light. In the original version, the game rooms were just pre-built 2D scenes, while 3D characters and zombies moved on a cleverly designed “grid” to let gamers think that the environment was also 3D. . These rooms are well-lit, so you can easily know what awaits you. The Resident Evil 2 remake is different. Many corridors and rooms in the Raccoon police station are dark, forcing gamers to use their flashlights from a third-person perspective. This gives gamers a limited view, creates an intimidating atmosphere, and is an opportunity for Capcom to scare players, especially when you turn through dark turns. Capcom intentionally designed that the police station has many hidden corners and corridors narrower than a normal building. Hence, gamers always have to stress because they do not know what is waiting behind the corner. Hidden in front of the door, I’m about to open.

The element of surprise and hidden

There are still some other factors that make this police department one of the game’s best areas. The entire gamer activity revolves around a common area (hall), making it easy to identify where you are and navigate easily without even a map. It is also the only place you have discovered in a long time, so you have time to look at the architecture and excellent light that Capcom has created. And there are also surprisingly safe and quiet moments often followed by sudden screams when zombies rush through the glass or similar scares. And it is impossible not to mention the existence of the Tyrant wandering in the building with the sound of threatening shoes, making gamers have always been terrified since the first time they met. The ground floor of the Raccoon police station.

Capcom’s dedication to creating the Raccoon Police Department paid off. Kadoi said that because the police department is a place you often see in movies but rarely used in the game (in 1998), Resident Evil 2 chose this building as a playground for gamers to fit in. It feels new and both true. Combined with the element of surprise and irony when the police officers here have been turned into zombies, gamers will be impressed, and thus this place becomes the most favorite place in Resident Evil 2.