After the death of his father, Connor completely removed the concerns about Templar and Assassin. He is now a real killer.

New York in 1782, Connor was now like a predator on his way to silently approaching the new leader of the Temple Templars, the venerable Charles Lee. Unfortunately, the assassin was captured by Lee’s men. When faced with each other, Lee seemed too impatient and blamed himself for Haytham’s death. He almost lost his mind when he shouted that he should have stayed that day, that Haytham had sent him out just because he was confident that it would not be dangerous to face his son Connor. It’s clear that the former Templar leader in the colony was wrong, and now Charles Lee wants to retaliate, want to slaughter, want to burn, and kill all the people Connor loved to report the great feud he murdered prime cause them.

While being taken away, Connor used his meticulous rights to defeat all escorts and also enlisted to investigate the next journey of Charles Lee. One of them said their boss had gone to the dock to take a boat back to Boston. The Indian quickly tracked down, but when he entered the HMS Jersey, he could not see Lee’s figure but only eavesdropped on the conversation “business” between mercenaries. Accordingly, Lee’s men are furious because the naval admiral of the HMS Jersey did not deliver the goods as promised. They threatened to kill the ship, frightening the British commander and promising that the goods would be delivered in two days. Besides, he also went to the Blue Dragon pub to meet and apologize to Charles Lee for these troubles. After assassinating the commander, Connor came to the Blue Dragon shop and immediately met an honest pretender, but after mild torture, he sprayed out all the information the assassin requested. Accordingly, Charles Lee was still active in Boston but did not dare to enter the city. He was always afraid of something and often hid in the shipyard near the harbor and even intended to leave the United States. Come here without any further interrogation. Everyone understands what Lee is afraid of, indeed as an assassin and as the main character, the ability to haunt the enemy is not small. By professional measures, Connor quickly found the person who was deliberately hiding from him, but Lee was as quick as a mouse with great vigilance.

In chasing despite the hordes of significant efforts to prevent the end, Connor was also able to approach Lee when they both fell into the burning ship’s cargo compartment. Despite falling down the mountain, Charles Lee was as strong as a buffalo while the injured assassin lay in one spot. Following the excellent tradition of villains from the past, Lee started talking to Connor with human values and was quickly shot down by the Indians. Despite being seriously injured, Lee managed to escape from the hold while Connor fainted. After regaining consciousness, the garden was empty, and the house was vacant, asking the Connor pier manager. Templar field in any place. 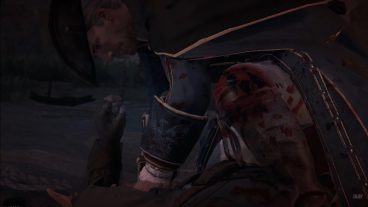 Story of Assassin’s Creed 3 Remastered – Part 11: Bloodline and disagreement Under the brutal guidance of destiny and an assassin’s role, Connor is still forced to confront and take his father’s life.

Heavily injured, gore and exhaustion is the common condition of Connor Kenway and Charles Lee when facing each other at the Blue Dragon pub. At this predestined location, the two people representing the two groups. The two ideologies that have been in opposition to each other for tens of thousands of years can calmly drink together with the last bottle of rum before they like the guests. hand took the temple church’s life. After finishing Lee, Connor also handy “confiscated” the locket, which is considered the door key of the sacred temple. One had the opportunity to see the opening chapters of Assassin’s Creed III. Six months later, the story continues in the abandoned village of Kanatahséton when Connor returns here to activate the medallion, and the evildoer Juno begins playing the lure.

Connor feels his mission had failed when the villagers were finally forced to leave, but Juno says that it is a false pay commensurate in return for free will. She asks Connor to carefully conceal the medal, not to be seen by anyone, and when the time is right, everything will proceed the way it should. Although still full of skepticism but because Juno is considered a God, the Indian guy finally made her request. When he thought carefully, he decided to bury the medal in the tomb of Connor Davenport, the only son who died prematurely from typhoid during the Anglo-Indian War of Achilles. Connor’s adventure in the game will end here, but the path of Desmond Miles in the real world is still ongoing. After digging up the locket, the hacker decided to use this “key” to launch the ancient temple. Juno appears to ask Miles to touch the pedestal sphere to save the world, but she is stopped by Minerva and exposes her false face for a long time. It turned out that before the Great Disaster, the famous scientists of Isu, Jupiter, Minerva, and Juno, who were not caught up in the war, locked themselves in the sacred temple to try to research ways to prevent the carpet art. In the meantime, knowing that humanity will survive and develop again, Juno has his plan, that instead of finding ways to save the Earth, he will rule it after the disaster. As a result, Minerva and Jupiter discovered and imprisoned her in the Gray Pole, the sacred temple’s network.

However, before being sealed, Juno silently implanted randomly into Aita’s human DNA generation, Juno’s husband, who died of a failed experiment. Sometime later, Minerva developed The Eye, a pedestal that allowed one to activate a barrier to protect the earth. Still, from the Gray Pole, Juno secretly modified it, causing anyone to start the pedestal. Will break the Juno captive seal. Discovering this, Minerva decided to bury The Eye instead of freeing Juno, accepting the Great Disaster, and at the same time almost eradicating all living things on earth. Shortly after, the Isu were utterly extinct, leaving the Piece of Eden and the sacred temples scattered everywhere. However, Isu’s heritage lasted for thousands of years through legends, history, and culture, becoming the basis of many different ideas and religions that have lasted over time. Simultaneously, although there are still many people carrying the DNA of Isu, there are occasional outstanding individuals with outstanding DNA, possessing the rare senses that have the same ability. Use the Piece of Eden with virtually no obstacles. Also, every few generations, the incarnations of Aita, or Sage, have established a cult of Isu worship, with the mission of freeing Juno from the Gray Pole and dominating the world. Desmond Miles is also a person Juno seduced into acting The Eye to free her.

This is a challenging option because not liberating Juno. The world would enter a new Great Disaster while it would not be better if she released things. Desmond’s choice is sure everyone who has played through already knows maybe I don’t need to repeat it.