After a year of training, he finally became an Indians Ratonhnhaké: ton also became an assassin and was given a new name Connor to facilitate operations.

In 1769, at this time, Ratonhnhaké: ton had just left his homeland and was still quite absent-minded on the border of Boston. Following the elder’s instructions, the boy went to Achilles Davenport‘s farm to seek help. Always, Achilles, after the betrayal of Shay Cormac (Assassin’s Creed Rouge) and the significant damage caused by the Colonial Templar caused in 1763, clearly preferring to be quiet to stay hidden rather than train a new assassin. Despite being chased out, Ratonhnhaké: ton tried to stay still to find the opportunity to talk to the older man. But trying all sorts of ways, even breaking into a balcony, couldn’t make Achilles think again. He seemed to be discouraged when he told the boy to stop daydreaming or be a hero who could pay for it online, not kidding. Only after Ratonhnhaké: ton defeated a band of bandits to protect the farm did Achilles’ attitude change. At first, the assassin was surprised when Ratonhnhaké: ton received the guild sign even though the Indians did not know what the Assassins Guild was. But after a long night of conversation, when Ratonhnhaké: ton recounted what his ancestral soul and goddess told, Achilles seemed to accept the theory of the lineage, which he said did not appear. Now hundreds of years since the time of the legendary Ezio ( Assassin’s Creed II ). Accepting the Ratonhnhaké hypothesis: ton may be descended from legendary assassins, Achilles takes him to visit the farm’s basement, where he stored many banned goods as a young black assassin. After giving Ratonhnhaké: ton to see if the killer he wore when he was young, Achilles decided to try training the Indian, and time will prove whether he is worthy of putting on the guild’s cloak.

The black man also showed the Indians a wall of pictures of the notorious Templar in the colony and reminded him, Haytham Kenway, his old man, was their leader. If he wanted to protect his ancestors’ land or the freedom of everyone, defeating his father was something Ratonhnhaké: ton had to face. Six months later, the Indian had been trained by Achilles with all the skills necessary to become an assassin, but he still lacked real combat experience. To further training in this respect, Achilles decided to take Ratonhnhaké: ton to Boston to conduct a small mission at the Town House. Accordingly, Ratonhnhaké: ton had to prevent the conflict between the colonists and the British soldiers, but this was not easy because the Templar gang attempted to provoke the conflict. After assassinating the Templar, who was plotting to open fire to provoke protester Connor (Achilles named Ratonhnhaké: ton), he thought everything was fine, but Charles Lee appeared to finish the unfinished work. 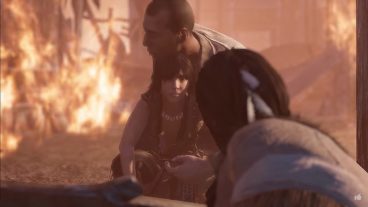 At this time, British soldiers began shooting at the protesters, the situation was too chaotic, and Haytham accused Connor as the mastermind of the shooting. Before he could regain consciousness, he discovered that older man Achilles had sneaked out of his way, so the Indians were forced to find a way to escape from Boston before the fierce chase of the soldiers. Just out of the raid, Connor immediately met Samuel Adams, one of the colony’s assassin’s essential allies. According to Adams, he was asked by Achilles to bring the Indian to leave Boston. Still, in his opinion, the fugitive was only temporary because if he did not delete the wanted poster, the next time Connor returned to this place would still be chased by the soldiers. In general, this is when we will explore the mechanism of using bribes to cancel the wanted war and explore the labyrinth of tunnels under the city (at this time, it is probably just a town). Boston is not related much to the main story.

After completing the tasks that Adams requested, Connor was finally arranged to board the train and leave Boston to return to the manor. When meeting Achilles, the Indian was unhappy because he was left behind, but the assassin thought the theory would be useless without dangerous practices like Boston. In short, Achilles was delighted with the test results and gave Connor a cloak of killers, meaning that Connor has now been recognized as an unofficial member of the Assassins Association. But before Templar meat or save any city, Connor had to keep the sawmill Terry’s hand from drowning. In return, Terry and Godfrey decided to stay in Davenport and provide materials for Achilles’s farm at affordable prices. Achilles also chose to revitalize the farm, so if Connor felt that someone needed a shelter, take them back. In parallel, the assassin also introduced the Indian to Robert Faulkner, the former captain of the famous Aquila ship (remember the ship that appeared when controlling Haytham Kenway?). At first, Faulkner proved to be an alcoholic, annoyed and sarcastic with everything. But seeing the condition of the Aquila, once dubbed The Ghost of the Nort Seas, is now stranded and decaying slowly in Davenport Bay, we can understand why the captain’s mood has declined. With the help of the two sawmills’ materials, after six months of restoration, the Aquila finally returned, and Connor made his first adventure to the dangerous Atlantic Ocean. The first voyage was also relatively straightforward when Faulkner mainly instructed Connor on how to steer the ship, adjust the sails, and how to navigate the wind properly. After mastering the necessary lessons, now the Indian must set sail to Mathar’s Vineyard so Faulkner can recruit more sailors. At Connor’s tavern, they almost fought with the free sailors because they faintly heard about Charles Lee’s name, but it was all right in the end. Upon returning to the farm, Connor is recognized by Achilles as eligible to put on the guild’s characteristic hood. From now on, the Indian is an official member of the Brotherhood of Assassin.