Connor has successfully assassinated a prominent leader of the Templar branch but is it as simple as that?

This time was in 1773. Connor is universal Achilles many high-tech toys of the organization’s other assassins in the world. This time will be equipped with rope darts Sheng Biao, introduced by the assassin as one of many useful toys of assassin Shao Jun (Assassin’s Creed Chronicles) at the Chinese branch. Connor fiddled with the new equipment and almost caused Old Achilles to scare him because the controls were not mature. Medium or gold friend Kanen’tó: kon came to inform that the colonial Federal government just sold the settlement of the Kanatahséton tribe, and they were forced to move to another place. According to this friend, they sent a special envoy to contact the government to express their objections but feared that it was no use, Kanen’tó: I hope Connor, with his relationships, can help much less in this. In the conversation, Connor knew that the person responsible for the land plot expelling the Indians was no stranger to him, the older man’s disciple, William Johnson. He was busy in Boston right now to prepare the necessary procedures for the forced sale. Achilles advises Connor to seek help from allies like Samuel Adams. Still, it is clear that the new assassin is too much dominated by negative emotions and does not care much about the older man’s advice. Arriving in Boston to meet Adams, after making the audience reluctant for his experimental presentation, Connor met Stephane Chapheau, who would later be a key member of the American Assassins Association. Now, Chapheau is just a chef who’s going crazy because he threatens to confiscate property if he doesn’t pay enough tax to the government.

Chapheau and his conversation were incomplete. The person in charge of collecting taxes, and the Angolan soldiers began to promote the conflict. Despite Adams’ objections, Connor said he would meet him at the rendezvous, but now it was time to see the discontent, pulling the hidden blade out for support. After defeating the British soldiers, Chapheau said he wanted Connor to have a pint of beer, but he had some urgent business to deal with, and the Indian went to the pub to meet Adams. Here Connor was introduced to William Molyneux, a real figure in history with many imprints in business, science, philosophy, and politics. This was an entirely fictional character when it was primarily introduced as a prominent merchant owner with a say to the colony’s British government. It is quite surprising that the chef and owner of the pub where the crew is gathering are Chapheau, whom Connor helped just now. 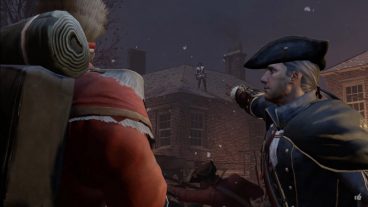 Story of Assassin’s Creed 3 Remastered – Part 5: High-ranking master after a year of training, he finally became the Assassin Ratonhnhaké: ton also became an assassin given a new name Connor to facilitate the operation.

If you read the United States history, the player will better understand the four people discussed. Accordingly, many colonies of the colony argued with a “no taxation without representation” stance, starting with the Stamp Act of 1765. They denied the authority of the British Parliament to tax the colony. Because this land does not have any representative members in parliament. The escalating protests led to the Boston Massacre of 1770 and the Gaspee’s burning on Rhode Island in 1772, followed by the Boston Tea Party in December 1773. The colonists destroyed a consignment of expensive British taxed tea. Back to the game, Molyneux told Connor that Johnson wanted to take advantage of the British government’s tax increase to smuggle tea leaves, so to find him, he had to shake hands with mercenaries specializing in smuggling. Back at the harbor, Connor will set up explosives to destroy the smuggled tea boxes to find clues about where William Johnson is hiding.

However, when he did not see the specific effect from the destruction of the smuggled tea boxes, Chapheau was crazy because someone stole some essential items, so Connor had to follow as a guarantee for the hot French chef count. After numerous fights with colonial tax officials, mercenaries, and British soldiers, the two arrive at the dock, and Chapheau kills a mercenary working by Johnson. From this moment, the chef decided to devote his loyalty to Connor but not yet an official member of the Assassin Association. When meeting Adams again, the Indians seemed irritable because they had to perform all sorts of things, but a feather of Johnson was still not seen but was assured that the Sons of Liberty revolt at the harbor tonight would be quite large. With such a commotion, the group’s overall goal will probably be revealed. On the night of December 16, 1773, a true historical event was re-enacted in Assassin’s Creed 3 Remastered. When Connor, Samuel Adams, William Molyneux, Paul Revere, and Stephane Chapheau incited the people at the rebellious Boston harbor, attacked British soldiers, and threw smuggled tea boxes into the sea. After the success, Connor suddenly realized that Jonathan Pitcairn, Charles Lee, and the person he was looking closely for is William Johnson standing watching everything that happened in the distance. To crush the enemy, the assassin was sober and handsome when he slowly accepted a carton of tea from Chapheau’s hand and then threw it into the sea, right in front of the Templars. Johnson and the others did not respond to this provocative gesture but quietly withdrew. Back at the farm, Achilles said that Connor should have killed Johnson at the right time, but the Indians thought it was unnecessary. The older man just smiled wryly and then said to wait and see. Time would tell it is necessary or not.

Six months later, Achilles’s warning came true when Kanen’tó: gazed at the news that William Johnson had gathered the centaurs and returned with a large sum of money to force the acquisition of Kanatahséton land. In the words of his best friend Kanen’tó: kon, the Johnson people are gathering the Indians at his manor to try to persuade them to sell the territory and then move. Connor decided to break into it to prevent this from happening when approaching the place where people were gathered assassins to see William Johnson trying to persuade the villagers. Still, unhappy memories rejected them from the Treaty of Fort Stanwix (a treaty made by King George III of Great Britain to resolve the conflict between Indians and immigrants, please read the history book for more details). The negotiation failed, and William decided to force the Kanatahséton to sell the land and then leave their territory. Seeing the situation seemed to be very unsettled, Connor decided to assassinate William Johnson before he ordered a shooting with the Indians. While dying, Johnson had the last word that Connor’s actions would not make things better, and the assassin was naive to believe in the beautiful words of the treaty signed by the British with the Iroquois alliance. According to Johnson, the colonists only happily negotiated when they needed food, water, and shelter when they were all wet in the new world. When things started to flow, the soldiers had gathered, the crops grown, and then there would be no agreement or negotiation, all just guns, wars, and killing.

Connor countered that Johnson spoke very well, but he was shooting at the Indians, but he just smirked and responded to everything he did without anyone judging. He was trying to save the Indians from the battle by using money to buy land and moving them to the West. It is only a matter of reluctance to use force because no Indian listens or understands the motive behind his actions. Connor was a bit bewildered about the peace and truth that William Johnson pursued but eventually politely wished him a safe journey as well as finding the desired things in heaven. When searching for William, Connor also discovered another essential piece of information. Accordingly, to increase the influence of the Templar in the colony, Haytham Kenway ordered Jonathan Pitcairn to find ways to destroy the British arsenal and food. If they succeed, Templar’s influence in this land will significantly increase. Connor right now is faced with quite a lot of mixed emotions, bewildered whether he assassinates Johnson is right or wrong and feels a bit regretful because after thinking carefully about things that Jonhson before dying said no must be unreasonable. Finally, the uncomfortable feeling of having to stand at the opposite ends of the line with his father, though Achilles had comforted, the effect was not significant. This time, they received a letter asking for help from Paul Revere because British soldiers were strengthening their raid with the Sons of Liberty members. Connor doesn’t want to get his hands on it, but Achilles thinks differently, and the assassin eventually has to go to Boston to see what the hell is going on.