In addition to the “perennial” relationship between Templar and Assassin, Assassin’s Creed III is also a conflict of many different ideologies.

Following the end of Assassin’s Creed II (excluding DLC versions), Desmond Miles, with his father William and allies Rebecca Crane and Shaun Hastings, found the Grand Temple of the First Civilization in a cave in suburban New York. The group starts moving the devices here and thanks Desmond to open the door sealed with Apple of Eden. When the temple is suddenly activated, Juno’s ghost appears in Desmond’s mind to make some critical news, which makes him instantly unconscious because of the blood power inherited by the genetic killer’s life afterlife begins to work.

Under the influence and illusions created by Juno, Desmond Miles began to connect with the Animus and experience the life of an ancestor named Haytham Kenway, a Templar who lived in England in 1754. Enter as Haytham. Desmond will begin the first task: assassinate Miko, who plays the leading role but not the Assassin Association’s Mentor at the Royal Opera House. Of course, everything has a cause. Haytham assassinated Miko to get the locket, which is seen as the key to opening the gate to the Grand Temple of the First Civilization. Arriving at the assigned seat, Haytham will meet Reginald Birch, a notorious leader of the Templar in London. Birch is known as the guardian and trainer of Haytham Kenway, son of the famous Assassin Edward Kenway. The relationship between the Kenway father and son is quite complicated. It seems to be a beautiful tradition inherited in the family because later Haytham and his son Ratonhnhaké: ton (Connor Kenway) even fought with each other to the point that people are living the dead. However, Assassin’s Creed III only briefly mentioned Edward Kenway, the details of this character are mostly recounted in the Assassin’s Creed IV: Black Flag version. Back at the theater, Haytham will follow the walls and stage wings to get close to his goal. It surprised viewers that the target was assassinated instead of provoking panic, calmly puzzled, even he talked to Haytham like two old friends. After finishing the victim and getting the locket simultaneously, he rushed out of the theater in terrible commotion because of the murder.

Miko is no stranger to Haytham because the two fought each other dead in liberating Corsica. Miko was even able to steal Miko’s Hidden Blade, which explains why a Templar like Haytham was wearing Assassin’s signature weapon. At Templar’s UK headquarters at Fleet and Bride, Reginald Birch said that Haytham’s achievement would give the group a basis to take it to the next level. Haytham was not overly optimistic about this, raising the question that practically no one knew what was behind the Grand Temple of the First Civilization. Antiques, artifacts, or deadly weapons, no one knows what the ancient gods stored in their warehouses. On the other hand, he is also worried that the Templar’s enemies might find this ancient warehouse’s location first, and then the group will be very passive. Birch advised his followers not to worry excessively and asked John Harrison the ancient warehouse’s exact location, but unfortunately, this counselor could not give the correct answer. Eventually, the leader of Templar in England decided to send Haytham to Boston to search for the location of the Grand Temple of the First Civilization as well as contact potential names to set up a Templar branch in the New World. In the nomination, the list can see five characters: Charles Lee, William Johnson, Thomas Hickey, Benjamin Church, and Jonathan Pitcairn.

In the 18th century, traveling between the Atlantic sides was never an exciting thing when it took several months to arrive in the most favorable weather conditions. Haytham’s luck was not very good when the crew stopped these goods on the boat because of free time entangled in unexpected storms. Haytham’s crew of fishermen disliked the aristocracy, and the Templar’s manner of dress showed that he certainly could not belong to the ordinary. Of course, with the well-trained Reginald Birch, Haytham quickly taught the sailors how the sky and high land was. Even when they switched to daggers, the guys who gambled all day, played girls at the dock and then started making trouble to release adrenaline were not Templar’s opponents. 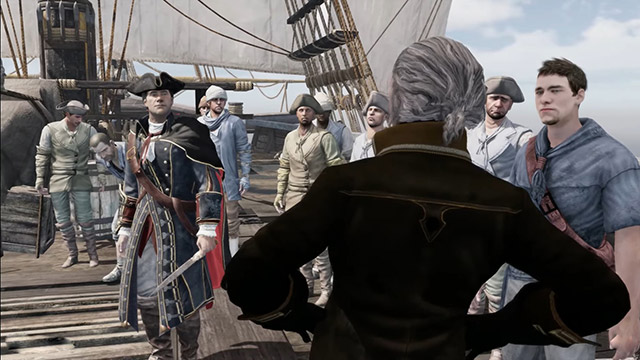 When things started to go out of control, Captain Samuel Smythe promptly came to the rebellion by asking Haytham to return to the boat compartment as well as face the crew of greasy sailors. Upon reaching the captain’s compartment, Smythe began to complain to Haytham that there seemed to be a plot to overthrow the captain, and if he wanted his entire life to come to the United States, he should cooperate with him. The Templar hurriedly interrupted this endless revelation and did not forget to remind if the captain dared to threaten him again, consider the head on his neck. Haytham then agreed to help Smythe scout around the ship to see if a riot was being prepared.

Avery’s mysterious conspiracy covers the Providence ship from the strangely uncooperative sailors to the strange yacht man or babble chills and cargo boxes. Someone constantly threw white paint into the sea for unknown reasons. By the 33rd day onboard, after many nights of investigation, Haytham said repeatedly throwing wooden crates into the sea is like someone wants to leave a trace for the stalker. Before he can say much, Providence begins to be attacked by the Aquila. Smythe asks Haytham to return to the cabin immediately. Haytham now meets Louis Mill, who was once among the sailors who provoked the Templar, turning out that Mill was a member of the Assassins Brotherhood, who followed the Templar from London for revenge Miko and regained the medal. This was followed by a ridiculous performance when Mill, with his advantages, decided to treat Haytham in an honorable way between men. Giving Haytham the blade to fight a duel was the last dumb act Mill could perform by the templar who did not take much effort to kill the brainless Assassin. To avoid the Aquila’s pursuit, Haytham convinced and intimidated Smythe to steer the ship straight into the storm.

With the aura of the main character (at the beginning of the game) despite being beaten by the storm and having to be like a batman on the mast when the wind blew level 12, Haytham Kenway finally calmly overcame everything. On the 72nd, there was still a white fog in the front of the Providence. Always, Smythe said he was about to dock. Haytham did not believe that he should climb up the main mast to observe. The results showed that the ship was about to dock, and Boston’s port was hidden in the distance.