“G,” or better known as “G-Virus”, is the most terrible monster in Resident Evil 2 Remake with the ability to recover almost immortal.

In Resident Evil 2 Remake, players have experienced boss battles with two monsters, Tyrant Mr. X and G-virus (referred to as “G”). Most of the time, we meet “G” is sometimes when the debt this debt is extremely tough. Each time it is defeated, it changes into a more vital form to continue hunting its prey.

If calculated according to the Resident Evil plot, then maybe “G” or things created from G-Virus will be the most powerful monsters of the series. Unfortunately, we only saw them once in Resident Evil 2 Remake, this for many different reasons, but maybe because it’s so strong, Capcom is distorted to know how to balance for then. 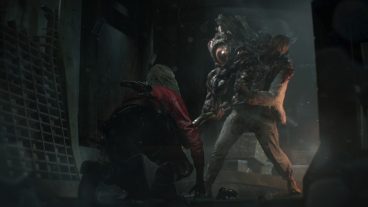 The game talked about the difference between G-Virus and T-Virus in a previous article, so we’ll briefly mention G’s birth. The G-Virus, whose full name is the Golgotha Virus, was discovered by Dr. William Birkin in T-Virus research in 1988. The name G can also be understood as “God-Virus” because it is true. It is an elixir that brings creatures close to immortality and possesses the power as a “god”.

The unique feature of G-Virus than everything that has ever appeared is that it is inherently an independent organism, unlike the T-Virus that combines with the host’s cells to mutate. Hence, the G-Virus only need to “attach” to any host in a short time before it completely transforms into a much stronger new life form. Because it is not dependent on the original body, G-Virus can freely evolve into many different forms, with enormous power and unmatched cell regeneration.

The power of G-Virus is how in the Resident Evil 2 Remake we have seen, a single “slap” of G (in the second evolution form) was enough to split Mr. X’s people apart as people tear the paper. It is bulletproof, fireproof, impact-resistant, generally against everything possible in the world. The only weakness is the yellow eye that shows up on the body. But in general, it’s called a weak point. That’s not true because if you shoot G, it will only temporarily quiet down and then continue to evolve. Even if it was the final form when G transformed into a giant form and was burned in the underground bunker, it could not be sure that it was dead. So why is G-Virus so powerful, ignoring the mutation problem as it is? The answer lies in its ability to recover. G-Virus has a characteristic that will treat all wounds on muscles. No matter how badly damaged it is, that is, literally “die and come back to life” rather than recreating every single cell like the other viruses. In Resident Evil 2 Remake, when we first met G in the form of Dr. William Birkin, we can see by which time he died, but the G-Virus can still make the most active. Move and scream as usual – in the original, his wife and son William even though he was still alive.

In the Resident Evil game series, there is probably only one thing that can be compared to the G-Virus in this recovery: the Resident Evil 4 Regenerator, created by implanting many Plagas into the object owners, can cure it. A Regenerator will not be destroyed as long as the Plagas are alive, moreover implanted under the skin, so they are not exposed like G’s eyes, meaning that Regenerator will be 100% immortal if meeting an enemy know it well.

But that is only theoretical because, with enough firepower, we can blow Regenerador’s whole body to ashes. But with G, it was different. Its huge size allowed this monster to withstand a ton of bullets on people would be fine unless it was put in the blender to crush it to pieces but unfortunately. Gamers at Resident Evil 2 Remake have no chance to verify it.

The only weakness of G is the inability to infect. A G can only infect another host with the same gene as what it currently possesses. But this doesn’t matter if we consider using it as a unique biological weapon. If we compare it with Tyrant, we can see that G-Virus injection is a mutation, and Tyrant follows the probability of one in ten million. The difference is so obvious.

G-Virus is not picky about the host. Anyone infected will be mutated like Dr. William Birkin. Imagine that Umbrella can create infinite creatures like the G in the Resident Evil 2 Remake, just by implanting the G-Virus into any host. Well, it seems that this world is enough to kill casualties already. T-Virus or any other Virus in the series is still far from reaching such supremacy, so it is not wrong to call G-Virus “God”.

Perhaps the exception is “good enough” to compare with G-Virus. It is probably T-Veronica. This thing is not picky. The host also helps the transplanted person keep the mind as usual. T-Veronica’s downside is that it needs hibernation time to tens of years for the host to adapt to Virus, only at this point, T-Veronica has lost a lot of G-Virus. “G-Virus” is something so divine that Capcom seems to have realized that it has just created a slightly unbalanced virus that can be put into the game. If following the plotting process for someone to continue researching G-Virus and create new generations more powerful, obedient, and more perfect, then maybe this series will be over as well.

For this reason, in the game, Dr. William Birkin is the first and only official G (the movie has one more but does not count). Resident Evil 2 Remake is rare when those who do not know The “G” at the base feel a bit of its unrivaled power.