A rumor is emerging that in Resident Evil 3 Remake, even if you hide in the Safe Room, Nemesis can still break the door to get in your way.

Only a short time before Resident Evil 3 Remake will be released. This time, everything is very hot, and everyone wants to see the “handsome” Nemesis, with a burning love literally along with Jill (they birds each other throughout the city).

But it seems that Nemesis knows how to hold a flamethrower was not enough when it was recently rumored that this monster could even kick the Safe Room door and grab the head to crush you like pounding rice in the house. 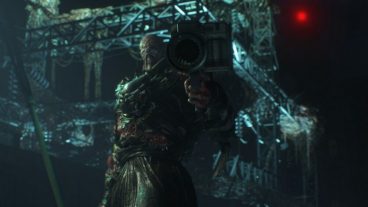 The plot of Resident Evil 3: Biological structure and the formation of the death of Nemesis Among the Tyrants created, the Nemesis in the Resident Evil 3 storyline is probably the perfect creature when it is intelligent, surprising.

This rumor comes from the fact that Xbox magazine has published the Resident Evil 3 Remake whereby for the first time in this series’s history. Nemesis will be the only monster capable of reign to break the door to break in. grab the player’s neck no matter where they stand – Yes, you don’t get it wrong, wherever it is, even in the Safe Room. As we all know, Safe Room or Save Room is a sacred place in any Resident Evil game. When you enter it, you will be safe and not afraid of anything that can harm you.

If Nemesis could crack this last shelter, I think there would be a mass of people peeing on their pants or smashing both machines and handles to flee. In fact, in Resident Evil 2 Remake, Mr.X’s father also can open the door. However, too much, we can still run into the Safe Room and wait for it to leave to take another path, and Nemesis is like a crazy guy grab the tentacle and grab Jill and start doing the perverted. Well, in this case, peeing on your pants is still too light. There were probably not many people who could imagine what Nemesis could chase me to until the end of the earth, what it would look like. I’m sure that I only needed to hear the sound of “Star” in the old version. The mass of people has started omelet types in pants already. There is an excellent point that Capcom did in the Remakes, that they edited the Tyrant’s AI so that they could find the player’s position, like the way Mr.X chased Leon around his ass in Resident Evil 2 Remake.

But Nemesis was a different matter because it was different from Mr.X in that this son of a bitch could “beat a man to death” – not a dumb guy like his senior. Nemesis runs faster than the player, and we must not forget that it smacked her head to the ground, then grabbed her neck and grabbed spray nozzles for the whole brain, not to mention in the later part of Nemesis evolved as the tentacles extended and pulled Jill’s legs again.

Now, if Nemesis can break the door, you can’t have a place to hide but have to run or kill it – of course, the second option is not a priority because, in Resident Evil 2 Remake, you also see how much ammunition is lacking. We do not know if Resident Evil 3 Remake will allow players to destroy Nemesis to get things as the old part so that you have a good reason to risk your life with it when being chased butt.

Fortunately, Capcom didn’t seem to like the April Fools’ news early, when they had just confirmed that Nemesis could break open the door to chase players despite the terrain. Still, it could not enter the Safe Room – Or more precisely, the traditional Safe Room. We can distinguish the traditional Safe Room as an independent room, with a typewriter (save) and the chest inside, which is still the absolute safe mecca in the Resident Evil 3 Remake. But while you are wandering around Raccoon City, there will be places with typewriters to save but not Safe Room. Resident Evil 2 Remake has introduced this feature already. If anyone remembers, after Mr. X shows up, we will have to go around to the police station to pick up things and cross the main hall, where it was originally the Safe Room but at that time, causing Leon to run around his butt.

Therefore, it is understandable that Nemesis could break the Safe Room door by mistake, which means it only broke the “temporary” Safe Room door, but not the “traditional” door. Fortunately, Capcom was very quick to confirm this news because many significant associations began thinking about Nemesis going into the Safe Room and destroying the typewriter for you from saving too, so maybe I’ll give up on playing. Resident Evil 3 Remake will be officially launched on April 3 on PC, Playstation 4, and Xbox One. In the meantime, you can learn about the plot of the Resident Evil series and the typical monsters Nemesis on the Game.