The Resident Evil timeline continues with the story of Chris Redfield and BSAA partner Sheva Alomar in the fierce battle.

Resident Evil 5 takes place in 2009, six years after the destruction of the Umbrella organization. Chris Redfield is now a BSAA member, sent to Africa to investigate bio-weapons smuggling in here. On the way to the Kijuju Autonomous Region, Chris met his partner in Africa, Sheva Alomar, a member of the BSAA Africa Division. The two then receive orders to meet the BSAA’s Alpha team in Kijuju to stop a bio-weapons smuggler, Ricardo Irving.

As soon as they arrived in the city, the two discovered something strange about the residents. The entire population of the town was infected with Type 2 Plagas virus and ready to attack them at any time. Entering the city center, Chris and Sheva meet the contact for the campaign and are fully armed. However, on the way to inspect the nearby buildings, they witnessed the horrific scene when a group of people used a parasite into a man’s body and turned him into a Majini. Control consciousness by parasites). Immediately the situation became out of control, and both were attacked by the residents here. 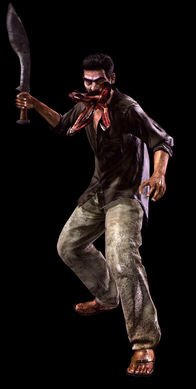 More about the BSAA (Bioterrorism Security Assessment Alliance): An international organization formed by the Federation of Pharmaceutical Companies at the Government’s request. The United States aims to prevent, search, and destroy organizations and individuals that develop biological weapons intending to attack people. The founding members of BS A A are Chris Redfield, Jill Valentine, and Clive R. O’Brian. BSSA is headquartered in England and other branches in Europe, the Americas, and Africa.

After escaping the onslaught of the mad crowd known as Majini, Chris and Sheva find Captain Dechant, the last survivor of Team Alpha. Dechant suffered a fatal wound but promptly gave the two of them information about Irving. Shortly after that, the two encountered a hideous creature, like thousands of leeches clinging to one body. According to Dechant, this is the culprit who killed the Alpha team. Chris and Sheva had to find a way to lock this monster into the closed room and use flamethrowers to destroy it and transmit data about Irving and the city’s situation to the BSAA center. Shortly after that, the two were rescued by Josh Stone, BSAA’s Delta captain in West Africa, while fighting a group of Majini. After arriving safely, Josh shows Chris some of the data they just found, including an image of a person who is thought to have been Jill Valentine for years.

According to information, Chris and Sheva searched for Irving, who was now in an abandoned mine not far away. The two have raided and besieged him into a mine next to the mine. Still, when preparing to capture him, a mysterious cloaked robotic figure rescues and rescues Irving while controlling a half-bat-half-crazy creature frantically attacked both. After defeating the monster, they met Dave Johnson, who was a member of the BSAA. Dave took Chris and Sheva through the desert to join the Delta. At the same time, they were attacked by an aggressive Majini group. The group fought very fiercely and finally cut off the group Majini. But oh, when they arrived at the gathering place, the group discovered in awe that the entire Delta team had been defeated, and Dave was crushed to death by a giant monster like a mountain demon. The two continue to fight, and after defeating the monster, they receive information from the BSAA that requires reporting their love to the headquarters. However, because of the information related to Jill Valentine, Chris refused to report and use the information from his former teammates they knew Irving was currently in an oil refinery area near the swamp. Along the way, Chris told Sheva about the story of Jill Valentine. In 2006, Chris and Jill participated in a campaign and encountered Albert Wesker, their eternal enemy. Both sides were defensive, but with supernatural powers, Albert Wesker was slow, and Jill was forced to sacrifice to push Albert and plunge with him. Therefore, Jill’s information is still a mystery because Chris could not find her body, so it has not been confirmed whether Jill is alive or dead.

Arriving in the swampy area, Chris and Sheva encountered an aboriginal tribe in the village of Sodibaya, both fighting against a Majini gang, except this time the Majinis were infected with Type 3 Plagas virus. The information left behind by this parasite virus on the host will make humans more transcendent than previous strains and remain conscious. After escaping from the village, they went to a mountainous region and discovered several military tents with an organization’s logo called TRICELL and some leftover documents in the area. TRICELL was the prime. It is a virus spreading in this area. Chris and Sheva quickly arrive at the refinery, meeting Josh Stone, who is also chasing after Irving. Josh is injured and requires everyone to withdraw from the operation, but later they are ambushed by a team of Majini, who fight and retreat to the jetty. They encounter the driver of the dead, Irving, and the mysterious cloak character who saved him. Irving escaped on a ship while cornering Chris and Sheva at the oil refinery set for the time bomb. Josh quickly grabs a canoe, and the three chase after Irving.

After catching up to the boat, our BSAA team caught Irving. Having been cornered, Irving injected himself with a particular strain of Plagas virus, turning him into a giant sea monster. Chris and Sheva once again destroyed him. Before he died, Irving promptly revealed a piece of information about Excella Gionne. This West African TRICELL director was behind the whole story and told Chris about a nearby cave, where Chris could find it. See all the answers that are in question. Chris and Sheva continue their journey into the cave. Here they discover the Sodibaya tribe is the guardian of a holy flower called “Stairway of the sun”, this is the first extract of the Progenitor virus. Going into the cave, they discover an old Umbrella research center, now employed by TRICELL, both finding out that this is where the Uroboros virus was developed, a new virus. When Chris uses a computer to track down Jill’s identity, they suddenly encounter the monster U8, both of whom must destroy it. However, Chris discovers that there is no information about Jill at this time. Excella Gionne appears on the computer screen and asks the two to leave here and not disclose Jill’s information. Going deeper into the research center, Chris and Sheva clashed with Excella again, releasing the type of monster that had once defeated the Alpha team to block their advance. After defeating the monster, Chris and Sheva eventually catch up to Excella, and this time, they meet the mysterious cloak character and the foe enemy Albert Wesker. Here, Albert shows the cards, and Chris is shocked to realize that Jill has never died, but Albert is controlled to become a puppet for his dirty work. Albert and Excella left, leaving Jill to stop Chris and Sheva. While fighting, Jill gradually recovered consciousness, and after a vital battle, Chris and Sheva finally destroyed the implant device on Jill to control him. Having regained consciousness, Jill asked Chris and Sheva to chase after Albert and Excella without caring about him.

Albert and Excella escaped on a large ship. Chris and Sheva broke into the ship and caught up with Excella. She was about to escape with a folder of documents and the Uroboros virus. Still, Chris and Sheva blocked her retreat, forcing her to inject herself into the virus, turning her into a hideous monster with many tentacles. After the choking chase, Chris and Sheva also destroyed Excella with laser guns. The two continue to chase Albert and, in pursuit of Albert, said they would spread the Uroboros virus globally with a chemical bomb. Uroboros virus: A virus isolated from the genetic code of the Progenitor virus, developed by TRICELL in West Africa. The virus was created by Albert Wesker and funded by the Excella Gionne development fund. The virus has three levels of evolution and is said to give users immortality and unrivaled power. Albert Wesker also tested the virus on his body, which is why he had supernatural power.

While chasing Albert Wesker, Chris received a call from Jill. She told him that Albert Wesker had a weakness: the abuse of the PG6A / W antidote for Uroboros / Progenitor virus to balance the development status. of this strain of the virus in the body. If he used too much medicine, he would be weak and temporarily lose his supernatural powers, which is an opportunity to destroy him. After a spectacular chase, Chris and Sheva also followed Albert to the aircraft camp area. Albert plans to use the aircraft to fire missile warheads containing the Uroboros virus and cause global disasters. With Jill’s information, Chris injected Albert with some antidote that weakened his body and temporarily lost his supernatural powers. Albert flees on the plane, but with Chris and Sheva’s fierce attachment and attack, the plane falls into a volcano. All 3 escape the plane crash and prepare for the final battle.

Cornered, Albert Wesker was forced to inject large numbers of Uroboros viruses into his body to evolve and destroy Chris. However, the duo Chris – Sheva, with the ability to survive, pushed Albert down the lava pool. At the same time, Josh Stone and Jill Valentine on a helicopter came to rescue Chris and Sheva when they got on the plane. Chris and Sheva used a grenade launcher to deal with Albert Wesker, ending a legend, a demon in disguise, taking him back to the dust. Resident Evil 5 has 2 DLC, Lost in Nightmare and Desperate Escape, to explain part of the plot of why Jill Valentine went missing and why Josh Stone and Jill Valentine appeared together in the last segment. However, this game encourages you to play the game to experience and avoid the spoiler.