Another key member of the Templar in the colony was destroyed, but Connor’s path was still arduous.

According to Connor’s inference, the Templars were directed at George Washington, and they would not stop until the colonial army leader was destroyed or annihilated. Connor hopes to hide in the dark for more comfortable protection, but Thomas Hickey’s too murderous assassination action has destroyed all. Now the assassin must stand in the light to fight the organization. His father is the most advanced member This time, it was 1777, at the manor of Davenport, Achilles was running out of advice to ask the Indian to adhere to his predecessors’ style of action. It was lurking, quiet, unobtrusive, but Connor argued that the assassins were weak and fearful of the head like Achilles. There would one day not have any members of the assassin. Can operate in this land too. 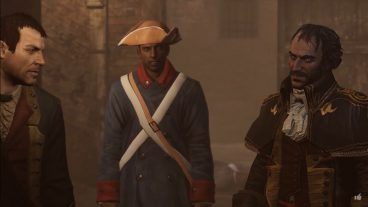 Assassin’s Creed 3 Remastered Plot – P.8: The assassin’s Connor’s path was too painful to be put in place by Charles Lee and Thomas Hickey. The Indian was almost hanged for this but ended up preventing the plot to Assassinate Washington.

The two teachers and students began to argue more and more fierce when Achilles thought that Connor was too insolent and disrespectful to his seniors. Simultaneously, the Indians criticized Achilles in fear, trouble and soon surrendered after his father’s failure. At the same time, I left the Templar to control the new world. Of course, these two students have their reason. Connor belongs to the radical faction. When they want things to be customary, do not hesitate. Acilles, meanwhile, had seen and known so much to realize the nature of items had never been as simple as it looked. He always reminded Connor that he was too naive, too simple, and every mistake in his decision could entail hundreds, thousands of innocent lives to be buried with. Unable to convince each other, the Indian guy finally rode his horse to the front line to meet Washington.

While chatting with the commander-in-chief, Connor was entrusted with the pursuit of the traitor Benjamin Church. The Templar traitor surreptitiously informed the Patriot’s military to royalist forces. Washington has suggested that recently reconnaissance reports that there has been a lot of chaos on the southern front line, Connor could start his investigation there. In the abandoned church, the Indians unexpectedly meet their fathers and learn the important news that the Templars are also hunting the Church. Idealist sermons again, Haytham said Templar neither served the British nor served the king, pursuing a goal no different from assassins. It is freedom, fairness, and independence. Only the behavior of the two sides is a bit lacking in similarities. After arguing about the ideal going nowhere, Haytham decided to ignore it and make an attractive offer. Accordingly, both Assassin and Templar have the same goal. Only Connor wants the number of goods that the fraudulently stole the Patriot, while Haytham wants the life of the Church to warn those who have betrayed Templar. When having the same goal, there is no direct conflict of interest why the two groups do not try to cooperate. The enemy of the enemy is you. Although not interested in the idea of shaking hands with his old man, Connor could not help but admit that in this case, cooperation is probably a not wrong choice because the influence of Templar in the colonies is stronger than Assassin so much. Also, Haytham’s superior combat skills and great lust made a newly born young man like Connor feel a bit confined, so he started cooperating.

Through professional measures of the Indians, Connor finally found the Church’s freight convoy and tracked them to the campsite. However, the Indian man saw that his old man had been captured by mercenaries while stalking around, so he rushed to rescue. A relatively quick and straightforward battle took place by the Kenway father and son, though serving for two different organizations, in the end, are all high-level players. Investigating mercenaries, they get information that Benjamin Church is hiding somewhere in New York, in an abandoned beer factory by the river. Another difficult trip to follow, parkour, assassinate and disguise to sneak into the enemy base. But when they broke into it and approached the target, the two discovered that this was just a reasonably elaborate trap. It is also necessary to talk more about the plot in the past. According to what Connor that Haytham gossiped about, it seems that he did not know (or pretend not to know) about Kaniehtí’s situation: io when asked if your mother had acceptable or not. When the indignant Indian answered that she had been burned to death when the village was set on fire by his underlings, Haytham was surprised and swore he had never given an order to Charles Lee or anyone else in Templar to do so. He only ordered his men to search for the sacred temple of ancient civilization and not claim the land or the lives of many innocent people. This makes us begin to feel the brain-twisting. Haytham tell the truth or lie? If so, who ordered the burning of the village? Charles Lee? Or else?

The ambushes are crowded in the current story, but the Kenway father and son are not vegetarian. While they were fighting, the mercenaries used to make stray bullets, causing nearby gunpowder to explode and the brewery to be engulfed in flames. While trying to escape the fire, Connor had the opportunity to help his godfather but this time in a relatively violent way as he threw the older man straight through the window to let them both fall into the river below. Despite the significantly older man always trying to put his son to death whenever the two sides clash, Connor ends up inconveniently abandoning his old man in the fire. According to the current situation, perhaps the Church had set sail for more than a day. There was no way to catch up to that bastard except to use the fastest Caribbean ship, the Aquila. In early 1778, after months of sailing at sea, the father and son finally caught sight of the merchant who was hiding on the Man-of-War warship. Although it was a bit big because of their ability to cling, it was not easy for him to let go and die when he prepared a strong team ready to play dry blood on the sea with Aquila’s crew. After a fierce naval battle, Aquila’s crew finally managed to break Man-of-War’s masts for close access. Back to the melee, the Kenway father and son did not get any fuss, only for a short time, the crew of Man-of-War had to submit to the great sex of these two gods. As he enters the compartment, Connor finds that Haytham is cruelly beating the Church and speaks up to prevent him because he wants to know where the military supplies are being hidden.

Church points to the hiding place but thinks that Connor is naive if he believes everything George Washington says. There is no cause for it in this world, and his smuggling of goods is only inevitable when the time pushes. Like the Patriots who kept crying for independence and independence from the British colonialists, they fought with British-made guns or wounded wounds after the war by the workers’ clothes handmade sewing in England. It is ridiculous as Connor always said that the Church is a bastard or Washington is absolutely the incarnation of the cause. This time, perhaps because the godfather was at his side, Connor wasn’t too freaked out about what Benjamin Church said before he died. He was looking forward to getting back as a staple for the Patriot army.