In addition to artificial parts’ appearance, the Human Observer’s story is also immersed in the virtual world, a strange way of life all day lonely in the house.

The Observer storyline metaphor a lot of modern industry details. It alludes to the near future when people have so many beautiful gadgets. Still, it does not make their lives better. Just hide the ugly and ugly face of the world.

In the story of the Observer in the late 2020s, people have achieved excellent results in 3D transmission technology, when they can create stereo projection devices with tiny dimensions. This technology is widely used with the first replacement of older TVs. Over time, things have become increasingly popular. These projectors are so cheap, so cheap that everyone who has them can own them easily.

One of the most important accomplishments of this is to make the living space more diverse by placing radios in residential areas that can instantly turn a low and dirty place into a luxurious luxury. People in the lower classes would love to use this system. The land available for construction is less and more expensive, making it impossible for them to afford a more beautiful place, so devices. This 3D wave is the perfect alternative. The scenery outside a residential area uses a projection.

By 2060, this stereoscopic projection system has made significant progress in the architecture industry, when it can create almost everything from exterior to exterior objects for indoor displays. Although it is still used as a decoration for the upper class, the government began to install it in poor neighborhoods when the land was poorly constructed – leading to living conditions down there. With the decoration and refurbishment of the exterior with fake goods, this measure helps a part of the population feel satisfied temporarily, although complaints about the house’s size remain.

However, over time, putting too many stereoscopic systems has caused many troubles, as it accidentally creates a more and more prosperous and poor gap, especially for those who have ever experienced the soft feeling of a real sofa. Many people also report skyrocketing energy use and causing disorientation, especially in public spaces, spread out by virtual buildings. Has been mistakenly resulted in a collision injury or a footstep. Over time, these stereoscopic devices became less and less installed, but it was still vital in the Observer plot, especially for poor neighborhoods.

In the Observer’s story, with the big countries clashing, in 2052 to 2059, a big war called “The Big One” broke out. It affected almost all nations, transforming strata, with areas completely abandoned after nuclear battles. It started in the late 2020s, when the world’s two biggest superpowers at that time on the East and West coasts were in a battle for control of the world, with the West on the wrong side of the road. The economy goes down, the more they want the opponent to experience the same situation.

The situation became terrible in 2052 when the two sides began to have armed conflicts, which often occurred in the Pacific to control extensive trade routes. However, there is still the third-largest force in the North. They fear the two rivals growing up each day and the possibility of being excluded from the world power balance. Therefore the Northern Empire decided to declare war on the East Coast when suddenly bringing the troops without warning.

Besieged from both sides, the East Coast decided to use all power to resist and open its nuclear arsenal. In a desperate attempt to suppress the opponent, the West Bank also returned teeth and launched atomic warheads in the opposite direction. The rains of nuclear warheads fell on all three superpowers’ land, leveling everything and sweeping the world into a terrible battle. The great war “The Big One” in the story plot Observer

With so much of the land deserted after nuclear rains, the Northern Empire was forced to find new supply sources to continue the battle, so they began sending troops to attack neighboring countries’ small neighbors in 2053. The remaining alliances wholly collapsed. The small country next to the Observer plot’s empire had to fight alone against the enemy when they realized they would not help in the next five years.

Meanwhile, Chiron – one of the largest corporations in the world, saw an opportunity to consolidate power in this great battle when their production potential at that time surpassed that of the host country. Also, Chiron possesses mercenaries, assassins, and special forces. They occupy a large part of Europe’s army, especially the country fighting the Northern Empire.

Chiron deliberately delayed the resupply of soldiers on the battlefield, resulting in unbearably heavy damage. The Chiron chiefs subsequently blamed the interim government for the military’s failure, to have an excuse to create a genuine overthrow and take control of the country. As the Observer story’s great battle begins to enter its final years, the parties’ losses are unimaginable, when even the wounded soldiers are only lightly treated to return to battle. With the development of nanomachines and artificial parts, field doctors even grafted on the spot without anesthetics or anesthetics to create new combatants died – this further caused the parties’ losses to increase exponentially.

In February 2059, in the last attempt to regain control of the battlefield, the parties again launched nuclear bombs with the most vigorous intensity. As a result, it turned a large area in Eastern Europe into an uninhabited desert and nearly destroyed the superpower’s rest.

Chiron could not ask for anything more at this event when they couldn’t expect it to turn to him suddenly. With the soldiers still intact and a newly overthrown government, Chiron quickly disarmed the parties still fighting and declared the creation of a new empire, with a border stretching across eastern Europe. – The Great 5th Republic or The Fifth Republic officially appears in the Observer storyline. Promotional posters of the 5th republic

With a population of more than 62 million, the fifth republic was run by Chiron, now known as the National Board of Directors. After the rapid overthrow and post-war election of the world, Chiron’s heads came to power with more than 80% of the vote supporting. The 5th Republic still traded with the world, but they sought to limit and begin to implement policies to prevent it from outside.

Moreover, in the aftermath of the great war, the 5th Republic faced many problems with natural resources, the gap between rich and poor, and the vast wall along the border separating them from the outside, accompanied by an uninhabited region wasteland after being hit by nuclear bombs.

Chiron established new laws to stabilize the situation. It divides the population into top-down classes, A, B, and C. All citizens will be numbered from birth and follow them to life. 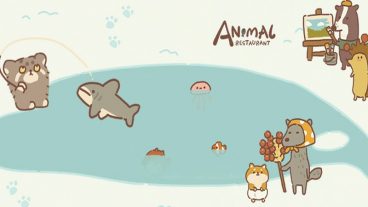 Pet Restaurant based on the true story of the 2008 earthquake? The Pet Restaurant community is increasingly getting caught up in mysterious letters, opening up a series of stories that have a close connection between the characters.

A-class citizens have the right to live and work everywhere, which can be considered elite or upper class. They were told not to leave their homes to avoid danger and that A-class citizens were also given the most advanced nanomachines or artificial parts. The privacy of their access to the network is confidential. It is impossible to access the private information of a Class A citizen without the owner’s consent or the supreme judges’ permission.

Class B citizens can live and work only in Grade B and C areas, but they can still move up to Grade A areas if allowed or in a business deal. The privacy of B class citizens is relatively protected, only law enforcement officers have access when needed, and it will be notified in advance. However, delaying or not complying with the order will be considered illegal, and that citizen may be demoted to C rank, the lowest class in the Observer plot.

C class citizens are the bottom people of the Observer storyline society. They are only allowed to stay in fixed places and are only allowed to go to the B level areas provided they have a passport. Class C may not move to Class A accommodation, in any case. All information and the life of a Class C citizen is forced to store in the equipment they use. The law enforcement authority is authorized to access it update them without notice. As of 2082, C-class citizens accounted for more than 91% of the Observer plot population. A house of citizens often seen in the Observer plot

To manage and control tens of millions of people, especially when 91% of them are C class citizens and are always dissatisfied with the government. Chiron has created a specialized force called Observer – scenes Looking at the technology that has access and clues from artificial devices, we’ll talk about that in the next section.