When it comes to Internet privacy and security, two terms are often thrown around: VPN and proxy. If you are wondering what these words mean or what do you need, if any, you are not alone. While these services offer something similar, it’s essential to know the differences and similarities to decide which one is best for you. 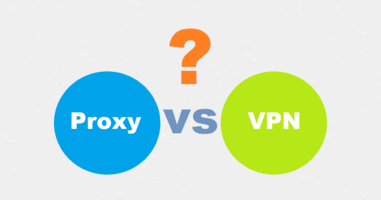 What is a VPN?

A virtual private network (VPN) is best described as an encrypted virtual tunnel that operates over the internet between your host server and your personal computer or phone. Anything you do on the internet, from checking your bank statements to playing online games, won’t be seen by anyone but the VPN host server, thanks to the strong encryption. Note that your activity may be collected by interested parties (also known as governments).

You can use a VPN to get around the geographic restrictions why your IP address will be different, but a VPN does a lot more when it comes to privacy. Public Wi-Fi, like the one you find in hotels and airports, isn’t always safe – people can keep an eye on what you’re doing if your data isn’t encrypted. But it becomes secure when you are using a VPN.

Many companies use virtual private networks to access their local intranet or corporate network while out of the office. The VPN can be used on any device with a client installed, so it doesn’t matter where you are trying to access it from.

However, for the average user, you can purchase a VPN service and connect to their server to browse the web privately and securely. Setup is generally straightforward, making it a suitable option for many. Before you rush out and download a VPN client, however, there are a few downsides you should be aware of.

What are the downsides of a VPN?

The first and perhaps biggest downside to a VPN is the price. For example, our top VPN server, ExpressVPN, is around $ 100 for an annual subscription and about $ 13 for a monthly subscription.

Compare this price with the plethora of free proxies out there – lots of which are insecure, but we’ll cover this in the proxies section – and you see where someone might be tempted to temporarily configure the proxy Free to watch a YouTube video blocked their country.

One downside of a VPN is that it can be a bit slow if many people use the same host server. This is especially true when it comes to a discount VPN option. But the same problem holds for proxies.

A proxy server is best described as an intermediary for your personal computer and on the internet. When you connect to a proxy server, your activity appears as if it came from the proxy’s IP address instead of your own. For this reason, a broker is useful in terms of geography. This is similar to a VPN, but it’s about the similarities stopping.

Instead of the traffic between your PC and your host being hidden behind an encrypted tunnel, it’s still primarily open to any interested party. This means that anyone with the right tools can see your internet traffic, just like you don’t use a proxy. There are also some instances of Java and Flash that cause brokers to fail when you load their elements in a web browser, allowing a website to see your real IP address.

Many free proxy servers are less reputable, making them less recommended for anything than quick access to geographically restricted, insensitive content. Since free proxies are generally costly to operate, you should no doubt see the ads, and your information collected by the proxy service may be sold to contractors. There is an excellent tool from Haschke solutions that allows you to check any proxy server’s legitimacy, whether free or paid.

There are two different protocols that proxy servers use to connect to the internet: HTTP and SOCKS.

HTTP proxies have been around for a long time, and they are the easiest and fastest to use. This is the type of proxy you will use if you want to browse the internet, as it can only be used to access websites.

When using an HTTP proxy server, your traffic remains unencrypted unless you connect using Secure Sockets Layer (SSL) – this is the “s” at the end of “HTTPS” in your browser’s address bar. Remember, even when connecting to a website that uses HTTPS, you won’t get the same protection a good VPN can provide.

Socket Secure (SOCKS) proxies are directing internet traffic above and beyond HTTP traffic from your browser. They are commonly used for torrent services (not that we ignore them) or connect to FTP and web servers.

Because SOCKS proxies have to handle more data (think Blu-ray rips files), they are often slower than HTTP proxies that only handle browser-based traffic. Like HTTP proxies, they do not provide any encryption unless you are using SSL.

Before working with either of these tools, keep in mind that nothing is entirely safe in this era of privacy erosion.

That being said, in most cases, a VPN beats a proxy for privacy and security. You get reliable encryption on all internet traffic from your computer. You can still get geographic restrictions unless your VPN provider sells you traffic. Your internet access will be entirely private. In most cases, a proxy is only used for simple, non-sensitive actions if you’re concerned about your privacy and security online.