Continuing the plot of The Last of Us in the first part 3, the Game will lead you to the next part of Joel and Ellie’s trans-American journey.

In the last of Us plot, Joel and Ellie made it through the dangerous summer, but their path to their destination is still far away. The next Fall didn’t seem to favor them anymore. Joel and Ellie dismissed the previous events to continue the journey to the place of Tommy, Joel’s younger brother. According to information received, Tommy currently resides in Jackson County, a small town located in the western United States. Their journey continues until the fall, turning out Tommy’s residence as an old hydroelectric dam. Upon arrival, the two encounter the residents guarding here, but fortunately for Joel, Tommy recognizes his brother and allows them to enter the residence. At present, Tommny is married to a woman named Maria. After assigning everything, Tommny and Joel talk privately, and Maria takes care of Ellie. Maria and her father seized and operated the hydroelectric dam site in Jackson County shortly after the epidemic struck. Here she provides accommodation for many other households. She met Tommy after he left the Fireflies organization and married him.

Joel reveals Tommy’s truth about Ellie’s condition and asks Tommy to help him get the job done because only Tommy knows where Fireflies is currently stationed. However, Joel met with fierce opposition from Tommy, and the argument took place. While arguing when they heard gunfire, Tommy said a bandit (bandit) attacked the hydroelectric dam and damaged some equipment, currently under repair. Joel helps Tommy to push back the bandits and plans to continue on his way with Ellie. Upon seeing Joel’s love for her, Tommy changed his mind and decided to help him complete his unfinished mission. Maria now appears and sharply protests this. She thought it was too dangerous, and she did not want it to threaten Tommny’s life. Their conversation accidentally reached Ellie when she stood outside the room. Ellie misunderstood Joel wanting to push Tommy’s responsibility to bring her back to Fireflies and end the journey here. Frustrated by this, she stole a horse and ran into the forest on her own. Upon learning that Eliie disappeared, Joel and Tommy followed the horse’s tail to the forest to find Ellie. Along the way, they encountered a band of bandits and roughly knew Ellie’s direction through the bandits. Finally, Joel found Ellie on an abandoned farm, where Ellie was enraged that Joel was trying to abandon her. Ellie also insisted she was not Sarah, Joel’s daughter, and did not need anyone to pity her yourself. Joel explained to Ellie that she would be safer with Tommy.

At that moment, Tommy warned that a band of bandits was running to their place. The three broke the siege and escaped. On their way home to Joel changed their minds and said they would take Ellie independently without Tommy’s help. Although advising Joel to his best about staying in the dam site, Tommy finally tells Joel the Fireflies’ location. Fireflies are currently stationed at Eastern Colorado University and use the university’s lab to research a cure.

Many days later, both reached the university, but it seemed to be a deserted area. Both search and search each room until they finally find a recorder of a researcher. Through information, Joel learned that the Infected Team attacked this place. The Fireflies organization could not stop the wave of monsters’ attacks, so they quickly left without having to pack up. The journey seemed endless as the new gathering place for Fireflies was now Saint Mary’s Hospital in Salt Lake City, a few thousand kilometers away. When the two were about to leave, they were ambushed by a group of bandits. During the fight, Joel fell from a high place and was pierced by an iron rod. Joel was lucky not to die but fell into a deep coma. Ellie, in Joel’s crisis, quickly bandaged up his temporary wound and sought shelter to end their fall journey in Colorado.

Winter comes with the cold breath of the snow queen. Snow-covered the hills and mountains, Ellie appeared alone, Joel’s condition was unknown. She is now more mature and must survive in the wild. Today, Ellie had hunted a rabbit and was about to return when she saw deer prints in the snow, and followed her shot and hit the deer, but it did not die and ran away. While tracking her prey with Callus (the horse she named), she encountered two men named David and James in an abandoned building.

David and James suggest that Ellie exchange them for the deer. In return for exchanging some supplies for her, Ellie also asks David to give him a hunting rifle for safety. Although very cautious, Ellie finally agreed to change prey hunted a few vials of antibiotics. While waiting for James to return to the base to take drugs, David tries to exploit Ellie’s information, but with what goes through, Ellie is cautious and does not disclose any information about herself. While waiting, they heard monsters coming in. Ellie was forced to fight the demons with David. Ellie was forced to survive in the wilderness alone.

Once he was freed from the monsters, David revealed to Ellie that the group attacking Joel and her in the university were David’s group, and he wanted Ellie to join the guild. Feeling trouble finding herself, Ellie quickly withdrew and took antibiotics when James returned. Ellie and Callus returned to the abandoned building, now we see Joel is in a coma, and the health is terrible. She gave Joel an injection of antibiotics and fell asleep next to Joel.

When it woke up, and Ellie heard the noise outside the house, it turned out that David’s group had tracked Ellie and arrived at their shelter. Ellie had no choice but to distract them and leave Joel lying in the bunker. It was the most arduous battle of Ellie’s life when she fought against dozens of thugs. Though the thought had escaped, Ellie was eventually captured by David and knocked unconscious. 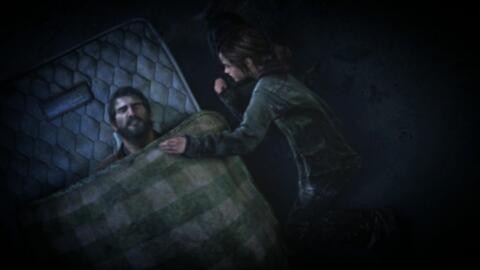 When Ellie awoke to find herself locked in a cage, she was horrified by the sight before her. David’s group was a cannibal group, and James was a genuine butcher when slaughtering a fellow man for dinner. David appeased Ellie by persuading her to join the group to give her away to live. Ellie lured David close, broke his finger, and tried to get the keys but failed. David walked out in anger and did not forget to remind Ellie that the next day would be her death. They would tear her body into pieces. Back to Joel, after being injected with antibiotics, Joel was resistant and awake again. Not seeing Ellie, Joel searched for her helplessly. Knowing that she might have healed a lot with cannibals, Joel frantically attacked and took out one by one. He finally retrieves the location of David’s group, which occupies an abandoned resort nearby.

Back at Ellie’s cell, the next day, David and James decide to turn her into “food,” while fighting Ellie biting David’s arm, she also tells him she is infected. Taking advantage of the two when they were in a daze, Ellie defeated James with a knife and escaped from the kitchen of hell. Following the window, Ellie tried to escape from David’s camp, but she trapped him in a resort restaurant. Ellie sought to burn down the restaurant and fight with David, a one-on-one fight, and eventually, they lost consciousness.

Ellie was the one who woke up first. This left Ellie her heart a deep scar, and it would follow her throughout her life. Outside, Joel in a blizzard destroyed David’s lair and saw the restaurant area on fire. Joel found the place, saved Ellie, and the two escape from that hell, ending a harsh winter. The end of winter