Following the series of hot topics about the plot, today’s Game brings you the story The Last of Us, one of the great products.

The Last of Us is a blockbuster in the game industry, launched in 2013, but until now, the game’s hotness has not cooled down when the second part of the game will be released soon with teasers. And the trailer has been officially announced.

The Last of Us is set in 2033, about America in the post-apocalyptic period. A century plague came from a virus mutated by the Cordyceps Brain Infection (CBI) strain caused by an infectious Pocket Fungus 20 years ago. They turn humans into cannibalistic monsters called The infected, who are bitten by the group within 48 hours. In the first few years of the outbreak, the virus wiped out more than 60% of the earth’s population.

The whole world collapsed; human civilization is in danger of falling into ruin. The United States, in its leadership role, has worked hard to coordinate with the World Health Organization (WHO) to find a cure vaccine. But the research took place in vain. The US government has ordered military orders to control the epidemic, establishing isolated areas in cities, internal and external areas. The military and Homeland Security have the highest authority. Residents living in their area are continually inspected; if anyone is infected, the military police have the right to open fire to eliminate the immediate threat. During the outbreak of the disease, an NGO called Fireflies was established, hoping that they will have the opportunity to find a vaccine to cure and restore water with its independent research. The US is as strong as before.

Back in 2013, when the disease broke out, Joel (the main character) that night with Sarah (Joel’s daughter) and Tommy (Joel’s younger brother) left home in Austin, Texas, to avoid danger. On the escape route, Sarah could not survive, leaving Joel in deep sadness. And 20 years later, that’s when our story begins.

Institutions in the game

Military: together with the Federal Disaster Response Agency and the Center For Disease Control is one of the US government’s last three organizations. The Army is responsible for ensuring security in the quarantine area and preventing anyone who intends to escape from these areas. Homeland Security, also known as the Federal Disaster Response Agency (FEDRA) under the Ministry of Defense. Is the management organization in isolated areas. This organization rarely appears in the game.

Center For Disease Control: under FEDRA is responsible for checking people suspected of infection.

Fireflies Foundation: As an armed non-governmental organization, as stated above, the primary purpose of Fireflies is to find a remedy for Meningeal Fungal Infections. The Fireflies Foundation was founded shortly after the outbreak of the disease. The first venue could have been in Los Angeles and the headquarters of Fireflies at Saint Mary’s Hospital in Salt Lake City. After nearly 20 years of development, Fireflies’ mission remains the same as to find a cure. But the way they work seems to have changed and degenerated. Fireflies’ members were more docile, less argumentative, and willing to fire against the army regardless of civilian life. A gizzard with the symbol of the group Fireflies

Hunter: A group of survivors who oppose the army and often plunder supply items (food, drinks, medicine, etc.) of those who accidentally stray into their area (or also known as the tourist. The hunters’ headquarters are in Pittsburgh. They (hunters) were initially residents of the Pittsburgh quarantine area. Still, because of insufficient government supplies distribution, residents here rebelled and took control of the city. The hunter team is probably the most well-equipped organization after the army and the Fireflies organization in the game. Bandit: Just like the Hunter group, bandits also tend to steal supplies, but this is only a small group, lurking in areas far from the city and seeking to survive by pillage nearby regions. 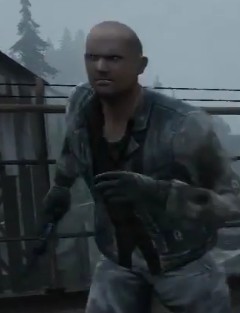 Cannibal (Canibal): This is the most dangerous group in the game. Contrary to the group of hunters and bandits, predators perform all inhumane behaviors when plundering and cannibalizing their prey as a measure to survive. Types of monsters in the game

The types of monsters in The Last of Us are four times the evolution of the Meningeal Parasite strain:

Runner: This is a primitive form of the disease, the infected person within 48 hours will lose consciousness of the body, but parasitic bacteria begin to attack the brain and lazy eye color pattern. The runner is not much different from an uninfected person with orange eyes. Runner still maintains good vision, but hearing is significantly reduced. These monsters usually attack in groups when listening to footsteps. Players can easily defeat the Runner by going behind their backs and finishing them without making a sound. Stalker: The second form of the infected person, the bacteria will then attack the brain more strongly, destroy an eye of the host and form mushroom roots on the eye. This stage lasts from 1 week to 1 year after the first stage before going to step 3. Stalker’s characteristics are like the name (sneaking) that they often hide and attack those they see. During this period, the Stalker still maintained good vision and speed. This is probably the most challenging type of monster in the game. 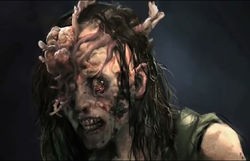 Clicker: Stage 3 after infection. By this time, the fungus had destroyed the host’s brain, so Clicker’s vision was lost entirely. In return, Clicker has a hearing and speed far beyond the previous two forms, just a small noise, Clicker can hear, so sneaky tactics are useless for this type of monster. The best tactic with the Clicker is to throw bricks or bottles at the wall, distract them, and silently move elsewhere, or they can throw heavy objects (bricks or bottles) directly at them, they will Stun, and the player can then use a knife or bow to kill them. Be careful when using the gun because just two or more Clickers can do you a salad right away. Bloater: the final form of the disease. These are reasonably rare forms because they take more than ten years to evolve. At this time, the parasitic fungus destroys the patient’s brain and fungal parasites all over the host body. This step creates Bloater’s body with an excellent natural armor that makes them invincible. Like the Clicker, the Bloater strain locates its prey with sound and will lock its prey by squeezing, not to mention the monster also can spit out toxic gases formed from fungi from afar. Fortunately for the player, this monster moves quite slowly, and we only encounter them a few times in the game. Above is some information about the context, organization, and types of monsters in the game. The game will bring you the details of the story of The Last of Us in the next section.