It’s hard to say that Resident Evil 3 Remake is better than the previous one, but one most noticeable thing is that it has started to tend to action.

The most anticipated horror game of all time – Resident Evil 3 Remake, has finally been released. In general, the name Nemesis alone is more than enough for everyone to be curious. Many people think that Capcom is a bit hasty when launching the Resident Evil 3 Remake after only one year and still using the old engine, but with the demo for trial play, everything is fine. However, after buying and experiencing this game, the writer felt that it started to show signs of deviating. 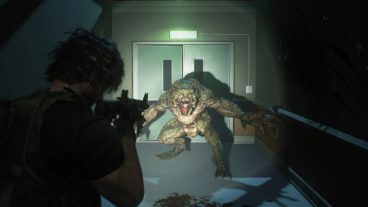 Resident Evil: The Birth and Character of the Hunter – Umbrella Hunter Unlike Tyrant, who is well-researched and carefully invested, Hunter is a mass-produced weapon to hunt down prey in the Resident Evil plot.

One thing to say about the Resident Evil 3 Remake is that everything happens so fast, like firing a supersonic speed rocket. Simply put, the Resident Evil 3 Remake has cut off the entire opening in the Raccoon police station. It shoots you straight to the part where Jill goes with Carlos’s group. When I played the demo, I was a bit suspicious, but it was distorted that Capcom let me fly so much. The fighting mechanism of the Resident Evil 3 Remake is an improvement of version 2, the most important of which is that Jill has acrobatics to dodge. This is something to say is super imba, although experienced in the demo, in the game, then you see how terrorist it is. We will no longer have to worry about being blocked by Zombie anymore because, with a simple R1 button, everything is solved.

If Jill’s standard could evade everything from Zombie mallet, Nemesis attacked, the Hunter was pouncing on, and the bullets were waving overhead. Of course, it still requires you to press at the right time, but the attack’s speeds The enemy’s Resident Evil 3 Remake is a bit slow, so it’s quite simple.

Furthermore, the ammunition in Resident Evil 3 Remake is extremely rich. According to my estimates, it was at least doubled in the second part last year, not to mention the game also has scattered boxes to add more. Now you can imagine a horror game where the protagonist can evade attacks, plus tons of bullets, and it starts to be a little wrong. This Nemesis is much more annoying than Mr.X in the Resident Evil 2 Remake, as he often runs frantically and chases after Jill. Another point is that this deadly monster uses the hose exceptionally smoothly. Besides, it will use the hose to grab the prey’s foot. Nemesis also knows to cling to something and then flinch so that it will take you long. I will see him behind him in a “naked” before him.

And as in the demo, we also see that Nemesis can pump viruses into regular zombies, causing the victim’s head to turn into a long-lasting tentacle. The selected Zombie loses its ability to pounce, but its new head can stretch and stab from extreme distances in return. This attack is hard to dodge because you can’t see that tentacle is coming from anywhere. These zombies appear dense on the road.

Despite only playing for more than 2 hours, the writer saw Nemesis switch weapons twice from flamethrowers to rockets. Besides, he had many other exciting things, such as taking momentum and ironing, lifting Jill onto the gun’s barrel, squeezing her trigger, or throwing her head like throwing rubbish. But there was a feeling that Nemesis was not worth it despite being very uncomfortable, scared as the original. The other thing is, if you can defeat Nemesis, he’ll drop something like the original, which is good. The first two issues were that Jill was able to abuse dodge evasion. Of course, some cases like Nemesis, who suddenly rushed to punch from behind, were a bit tired, but facing him face-to-face, I made sure he didn’t. It is impossible to touch you. Nemesis’ swinging speed was extremely slow, and in any case, she could dodge the attack successfully, not to mention the leaking gas tanks or electrical switches on the road that could hold the monster off.

The typical “Stars” of Nemesis were not as creepy as before when this monster mostly jumped to punch but was very “reserved”. You will find yourself running and avoiding Nemesis always, unknowingly making the game beat faster and very inclined to action. Although the Hunter appeared early, too much ammunition made Resident Evil 3 Remake less horror. It is obvious how to be afraid of a Hunter Gamma when it only takes one shot of Flame Round to return to the grandparents.

Even in the first confrontation with Nemesis, the way this monster attacked was still too predictable, and the space was extensive so you could run around comfortably. I don’t feel the same pressure as when I was imprisoned with the G-monter in the previous version. This is the type to hold the bullets discharging the enemy to death. The dark corners of obscure views are also less. When meeting Licker, the hunt or nerve torture is no longer scary because you can dodge the blow too easily. It feels like the Resident Evil 3 Remake begins to fall into previous failures’ footsteps, putting heavy action on horror. After more than 2 hours of writing experience, I had no startle or pounding heart like last year, which is not a good thing.

The game will continue to have Resident Evil 3 Remake reviews, plots, and instructions soon, so please look forward to it.